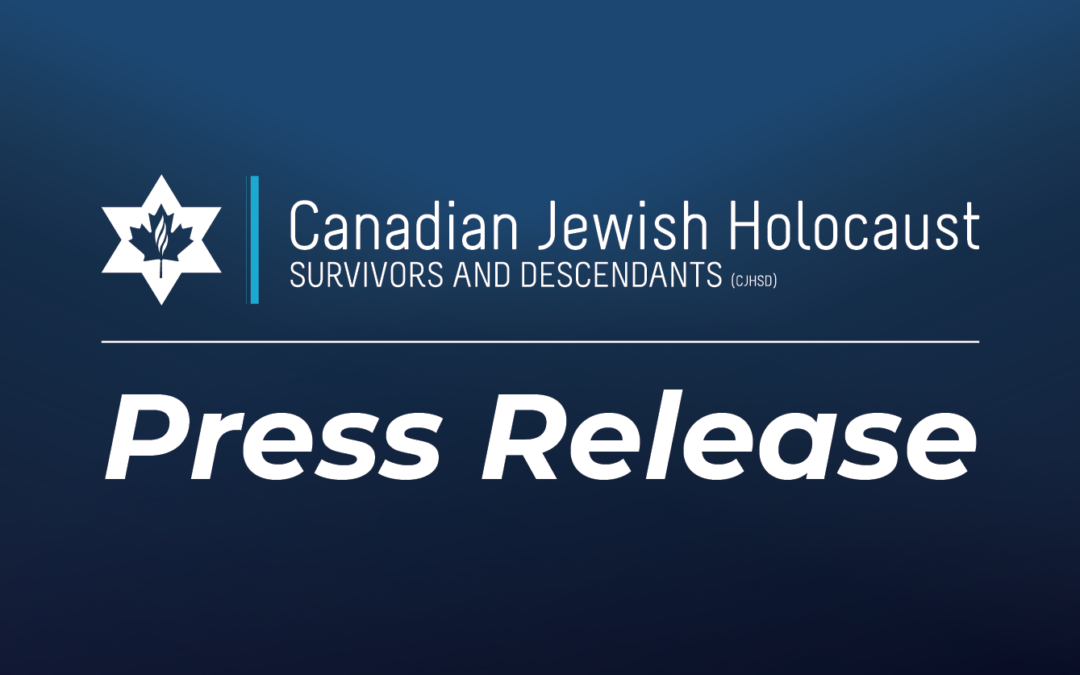 Montreal, QC – The Canadian Jewish Holocaust Survivors and Descendants (CJHSD), an organization affiliated with the Centre for Israel and Jewish Affairs (CIJA), has confirmed its election of new members to their Board of Directors. Members of the CJHSD’s Board are either survivors or descendants of survivors of the Holocaust, with a passion for advocating on behalf of the victims of the Nazis.

“I am committed to continuing the work of our Immediate Past Co-Presidents, Hank Rosenbaum and Sidney Zoltak,” said Pinchas Gutter, Co-President of the CJHSD. “As a Holocaust survivor it is my moral responsibility to ensure that ‘Never Again’ continues to have meaning and that justice is served on behalf of Canadian Holocaust survivors. As our survivor community continues to diminish, the work of the Canadian Jewish Holocaust Survivors and Descendants is even more important. I look forward to assuming my role as Co-President.”

“It has been a great honour, as the Co-President of CJHSD, to advocate on behalf of the Canadian Holocaust survivor community,” said Sidney Zoltak, Immediate Past Co-President of the CJHSD. “Working on such important files as securing restitution for Holocaust victims, fighting to revoke the citizenship of Nazi Helmut Oberlander, and seeking an apology from the Government of Canada for the MS St. Louis are just a few of the advocacy initiatives we have led during my tenure as a Co-President of this organization. I look forward to working with the incoming Co-Presidents as a part of CJHSD’s Executive Committee and continuing my work as a Canadian Board member representing the survivor community at the Conference on Jewish Material Claims Against Germany (Claims Conference).”

“We are pleased to welcome and work alongside the new Board of Directors,” said David J. Cape, Chair of CIJA. “We will continue to work tirelessly with the new Board to speak on behalf of Jewish Holocaust survivors with a unified voice, ensuring their stories and the lessons of the Holocaust are never forgotten. We offer sincere thanks to outgoing board members, Gita Baack, Elly Bollegraaf, Hedy Chandler, Myra Giberovitch, Paul Herczeg, David Korn, Robert Krell, Helena Levitt, Martin Maxwell, Harry Rosenbaum, Musia Schwartz, Vera Schiff, and Morris Strug for their dedicated advocacy on behalf of Canada’s Holocaust survivors. Their contribution to the CJHSD will protect the legacy of the survivors and their descendants across the country.”

The Centre for Israel and Jewish Affairs (CIJA) is the advocacy agent of the Jewish Federations of Canada-UIA.

The Canadian Jewish Holocaust Survivors and Descendants (CJHSD) is a grassroots organization dedicated to advocating on behalf of its members and represents Canadian survivors at the Jewish Material Claims Conference. The CJHSD is an independent organization affiliated with CIJA.

More information on the Executive members of the CJHSD Board of Directors:

Pinchas Gutter (Co-President): Pinchas Gutter (b 1932 in Lodz, Poland) is a Holocaust educator and frequent guest lecturer for the Sarah and Chaim Neuberger Holocaust Centre and the March of the Living and March of Remembrance and Hope programs. He is one of the pioneers of an innovative project called New Dimensions in Testimony in which his hologram will be wheeled into classrooms, lecture halls and museums. The idea is that the audience asks questions and pre-recorded statements from a holographic Gutter will respond – much as if talking to the real person. Gutter has also been the subject of a number of films by directors such as Fern Levitt, Eli Rubenstein, Stephen D. Smith and Zvike Nevo.

Edit Kuper (Co-President): Daughter of Jews from Poland who escaped to the East after the German invasion of Warsaw and were sent to KomiSSR (Siberia) and Kuybyshev (Samara), Russia. Repatriated to Poland to find that their entire families were killed except for a sister, they made their way westward to Austria and were sent to the DP Camp Puch. From there, Edit and her parents were brought to Montreal, Canada in 1948 by The Tailor’s Project. Edit grew up in a circle of Yiddish speaking Holocaust survivors.

Dori Ekstein (Vice-President): Dori Ekstein is the daughter of two Holocaust survivors.  She is a teacher by profession, working as a supply teacher at two Hebrew Jewish Day Schools.  At the same time, Dori became involved in a variety of volunteer work, including at Zarienu Private school working with children with special needs.

Sara Weinberg (Executive Member-at-large): Sara Weinberg is and has been a Professor in the Education Department at Concordia University since 1984. She is the Director of the Early Childhood and Elementary Program which certifies graduates to teach grades Kindergarten to grade 6.

Sara is the daughter of Holocaust survivors and has ‘grown up’ in a house where the Holocaust was a ‘natural’ and ‘open’ subject of conversation. She has attended and participated in Holocaust Conferences and has been a group leader on the March of the Living in 2010. Sara has been involved in Holocaust Remembrance, Commemoration and Education for many years. Sara and Sidney Zoltak were Co-chairs of the Remembrance and Yom Hashoah Committees at the Montreal Holocaust Memorial Center for 15 years,Sara has been a dedicated Board member of the CJHSD Organization since the term ‘Descendants’ was added. She works and will continue to work tirelessly for the benefit and welfare of the Canadian Survivor Community.

Hank Rosenbaum (Immediate Past-President): Hank Rosenbaum was born August 1936 in Warsaw, Poland. In 1939, the Rosenbaum family were forced into the Warsaw ghetto where his brother perished and where the family remained until 1942. Remaining family members escaped the ghetto through underground sewers, eventually arriving in the town of Lukow, 100 km away where Hank and his family were hidden in a barn by a farmer and childhood friend of Hank’s father.

They escaped into the forest and remained there until liberation by the Russian army in 1944. Hank subsequently lived in a Displaced Persons camp in Germany until immigrating to Canada in 1952 at the age of 16.

Sidney Zoltak (Immediate Past-President): Born in Poland, Sidney Zoltak was eight at the outbreak of WW II but, thanks to the bravery and kindness of a family of strangers who hid them in their barn, his family survived to the end of the War. Following two years in a Displaced Persons Camp in Cremona, Italy, Sidney and his mother (his father had died at the Camp at the age of 42) came to Montreal where he finished school and began to exercise his natural inclination as an entrepreneur, becoming an insurance agent in 1965.

Sidney is the author of My Silent Pledge, the story of his family’s war experiences and his life in Canada. He was recently welcomed back to Cremona, Italy, to the site of the Post-War Displaced Persons Camp to educate the local population about the history of the site and where local scholars had prepared a documentary about the Zoltak family’s stay at the Cremona Camp. He was honoured by the Mayor of the Town and his story celebrated as an intrinsic part of the culture and learning of the people of the region.

Sidney has been affiliated with the Yiddish Theatre and the Montreal Holocaust Memorial Centre. He is also co-president of Canadian Jewish Holocaust Survivors and Descendants and member of the Board of the Conference on Jewish Material Claims Against Germany, Inc.